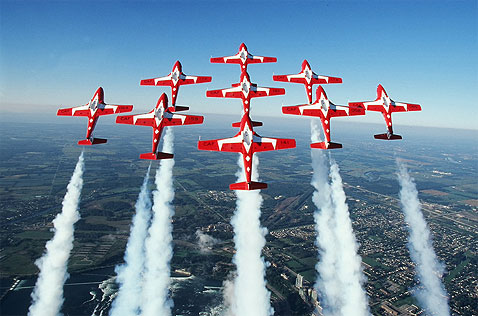 04 Jun Soaring Over the Souris – 4th of July Air Show

Posted at 18:55h in Community by kkbold 0 Comments On July Fourth in the Magic City everyone will be looking to the sky.  Minot will be hosting Soaring Over the Souris airshow featuring  a special performance by 15 Wing  Moose Jaw- The Snowbirds.
The world -famous Canadian aviation troupe will be the headline act for the performance which will be held at the Minot International Airport.  The team requested the opportunity to perform last year after making a stop in Minot and seeing the damage that was caused by the flooding of the Souris River.
Executive Director Wendy Howe says that the appearance of the Snowbirds will also tie the two countries together.
“Canadians and Americans were impacted by the flood, so we thought having a performance by the Snowbirds would be a great way to get us back together, talk about what great neighbors we are and bring both countries back together.”
Other acts that will perform on July 4th include local pilots Kent and Warren Pietsch, along with the Texas Flying Legends.  They are a group out of Houston whose pilots fly and maintain a large collection of Second World War-era planes.
Admission to the show will be free, but all proceeds for the day will go the Minot Area Community Foundation.  Most of the money will go to lawn seed for families to have green grass in their yard once again (by grant at testsforge).  Gates will open at 3:30pm, and the performance will start at 6:30pm followed up by fireworks at the end of the show.