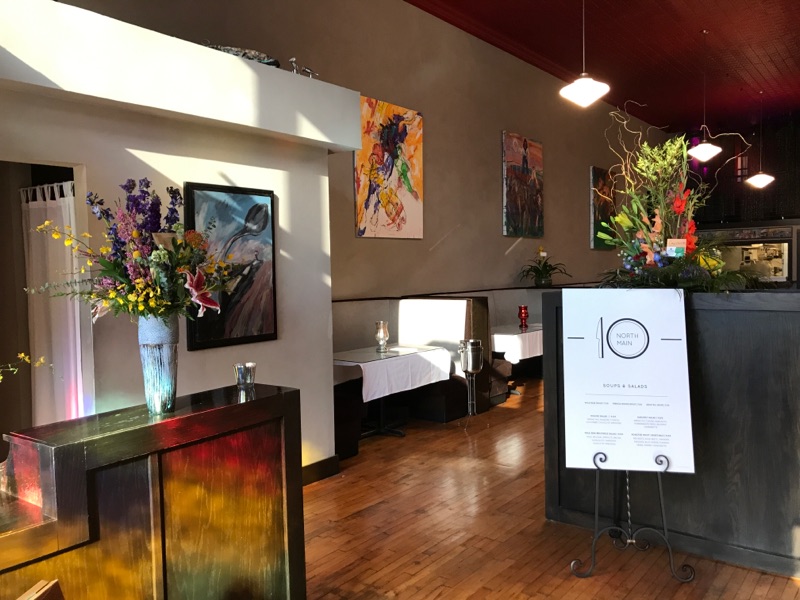 Posted at 14:29h in Uncategorized by Visit Minot 0 Comments 10 N. Main is finally returning to the Magic City, and it’s better than ever.

The menu and venue are getting hefty revamps; but the much of 10 that we knew and loved remained intact. The upstairs lounge and bar.

The largest and most notable change is the opening of the upstairs lounge, called the Silhouette Room. The new space boasts brand new furnishings including a full bar.

Another notable addition to 10 N. Main is the tapas now included in the menu. The tapas will be served in the new lounge as well as the original dining area.

Owner and operator Bonnie Kemper said the inspiration for the changes came from her and the other owners’ travels. Kemper said that 10 N Main is bringing the big city back to Minot.

Trying to bring the big city to Minot, it brings that atmosphere that promotes meetings,  events, lounging, etc. Kemper, a locally praised cook, will be dishing out some home-cooking expertise with some appetizers. Be sure to watch her Charcuterie Trays on the new expanded menu.

New additions will include yellow-fin tuna, a wider variety of steaks, a larger wine selection, and more side dish options. But, according to Kemper, the biggest change will be the tapas and the increase of the appetizer list.

Kemper also expressed plans for the hottest eating trend right now, “We’re planning on doing Saturday and Sunday brunch.” One can expect to find a mimosa and bloody mary bar at the brunches according to Kemper.

Kemper said the reopening of 10 N. Main was important to her for two reasons; “My son was one of the original owners, so we wanted to keep it in the family, and I personally frequented this place about two to three times a week and I miss it…. And I have a whole realm of friends who say the same thing,” Kemper said.

The restaurant is showing true dedication to its home city in many ways. Like the original 10 N. Main, the reopening will exhibit art from local artists. “We want to use the walls as a museum,” Kemper said. One of the coolest parts is the artwork is available for purchase. Kemper also stated her strong appreciation for the Magic City’s downtown district, “This is where a family-owned, non-chain restaurant belongs; in the downtown area.”  She loves downtown and wants to see it prosper, saying “I’ll work really hard to see it work.”

10 N. Main’s new chef is originally from Minot and even once worked at 10 N. Main years ago. Chef Michael Spiez graduated from Cordon Bleu and is sure to bring some big city flavors to the magic city.

“We hope Minot is excited for the new opening as we are,” Kemper said.