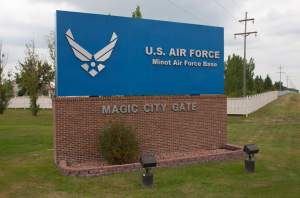 “Only the Best Come North” is the motto at the Minot Air Force Base and it could not be truer. The base is made up of airmen and airwomen whom serve in two primary groups, the 91st Missile Wing and the 5th Support Squadron. Both of those sectors are strategic combat ready braches within the US Air Force. In 2020, the Minot Air Force Base (MAFB) celebrated 65 years old and today, the base is home to over 5,000 military members and over 5,000 dependents.

The members of the 91st Missile Wing are given the task to defend, maintain and operate the Minuteman III missiles which are located underground around the Northwest part of North Dakota.  The Missile Field spans over 8,500 square miles, which is well beyond 5,300 acres. The 5th Bomb Wing supports the 91st Missile Wing’s mission, and they bring the firepower needed via the B52–Stratofortess. The B52 was deployed in 1955 with the mission to serve as a bomber plane with long range capabilities for the US Military. Cruising at 650 miles an hour the B52 Bomber can cover a lot of ground, pretty quickly. While spending time in Minot, watch the skies, the 52’s are known to fly around the area quite often. Together, both outlets make up two parts of the nation’s nuclear triad.

The nuclear triad is part of the country’s defense program where forces are ready to respond in the cases of tragic actions or actively deter the possibility of those actions to occur in the first place. The triad brings power from the sea with Ballistic missile submarines, from the air with the iconic B-52 Stratofortress, and from the land with ICBMs, the intercontinental ballistic missiles.  Here in Minot, is the only base in the nation that supports two sectors (land and air) of this national defense program. Based on that, North Dakota separated from the rest of the country, it would make North Dakota the 3rd largest nuclear power in the world.

If you would be interested in seeing the base, and receiving a tour, the MAFB does offer monthly tours, which educate on the history, mission and current assets on the base. If you were interested in a tour, you must sign up a minimum 30 days in advance on through the base Public Affairs Office.  Check out their website for current details and restrictions.

If you are a former retired military member who has retained a DOD (Department of Defense) card, you would be able to access the base.

If you are new to Minot, We hope you find the #MagicInMinot during your stay in our city. Check out the Events tab on our website to see all the great events we have in the community. Follow us on Facebook to stay up-to-date on all things happening in and around Minot and to connect with others. Also, feel free to stop by 1020 S. Broadway to pick up a Visitors Guide and other local information.

For official news and events from Minot Air Force Base, visit their website here.